The artist Dorothea Tanning lived to the age of 101.  Her long career as a painter, sculptor and writer is being celebrated now at Tate Modern in London.  And what a celebration!  For as long as Dali is better known than Dora Maar and Man Ray outstrips Lee Miller in terms of fame, the mounting of retrospectives for women can look like merely political correctness: it isn’t.  There was not a hint of tokenism in this latest solo exhibition of one of the women artists associated with surrealism.

Instead the Dorothea Tanning event showed an authoritative vision, and the development of style and theme through a sustained career, with work that spanned the truly disturbing all the way to the warmly good-humoured.  I am not an art critic and I have no training in art.  What I love about the surrealist women (and I love them so much that I wrote a novel about them) is the immediate, accessible joy I find in their work.  My definition of good art is that it should be inspiring, provocative and amusing: Tanning’s work was all three, and sometimes all three at once!

Like Leonora Carrington (see my review of her Tate retrospective here) Tanning, an American born in Illinois, was enraptured by surrealism at a young age and sought out its (male) practitioners.  Unfortunately she reached Paris in 1939 when most of the surrealists had fled to America or elsewhere due to the war, so it was to be in New York that she encountered Breton and the others, most significantly Max Ernst who she married and lived with until his death in 1976.

The story goes that he selected a painting of hers for exhibition and named it Birthday to signify the day of her birth as a surrealist.  This sort of older male legitimisation of young 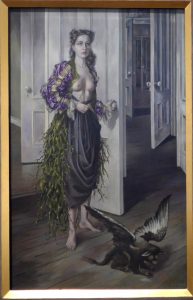 and sexy girl wannabe is repeated again and again in the lives of the surrealist women.  Tanning might well have needed the “in” to the surrealist group but her talent was already formed as is clear from this astonishing picture.

Birthday is the one of a series of artworks featuring doors in Tanning’s work that stretch from this (in 1947) to Door 84 (1984) and doors occur in the best known of her paintings Eine Kleine Nachtmusik (1943).  The little girls in this work are caught in a tornado of adult sexuality.  These are indeed the femmes-enfant I discussed in a previous post but they are not sexualised for the pleasure of the viewer.  Similar little girls appear in Children’s Games (on a canvas much smaller than I had imagined) and they are tearing down the wallpaper but finding only the bodies of adult women behind the walls.  All these are children wrestling with the onset and demands of adult sexuality: their De Sade knee boots or heeled shoes are combined with undeveloped bodies and fear.  For what indeed is behind the doors of the plush hallway in Eine Kleine Nachtmusik and what threat is posed by the predatory sunflower snaking up the stairs? 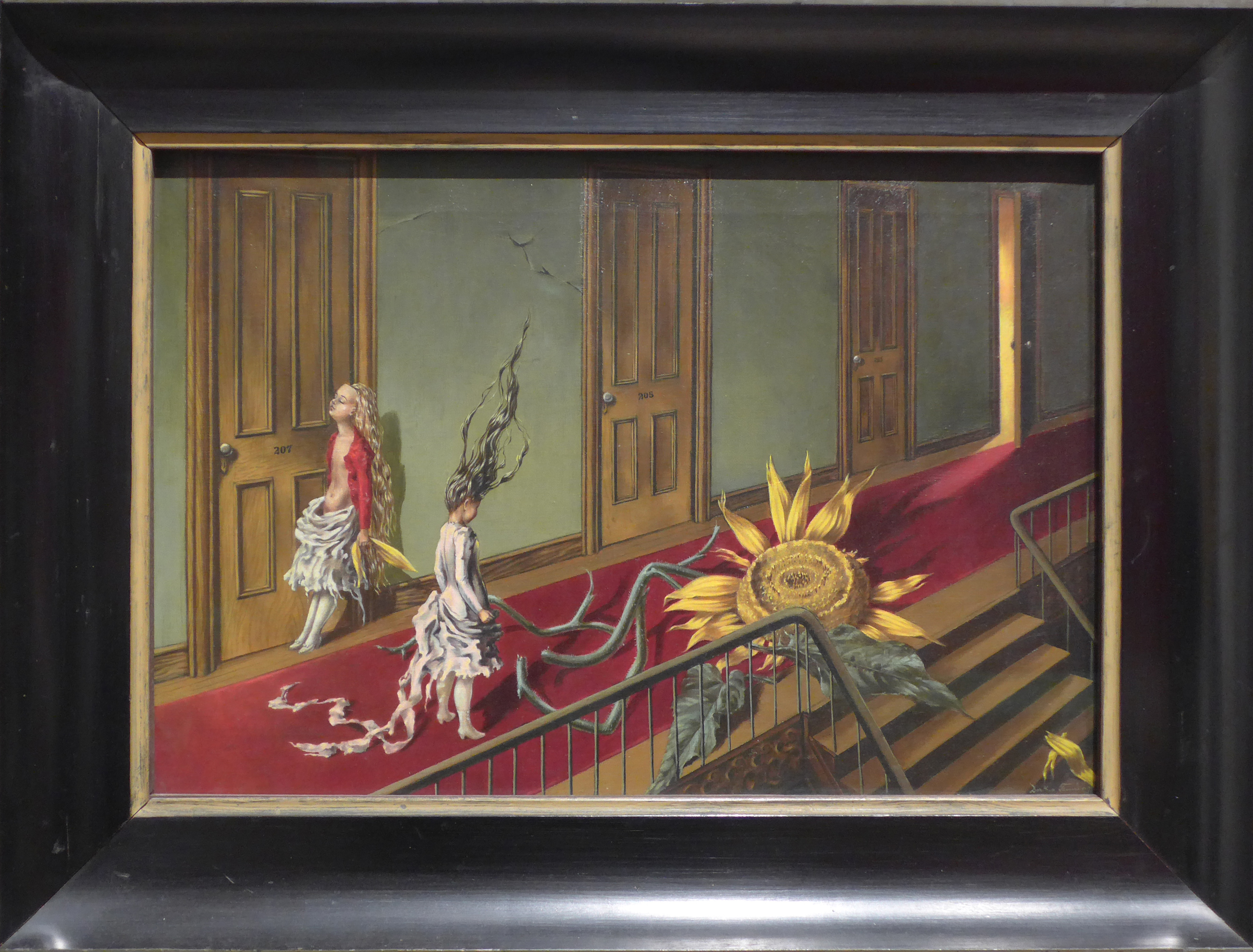 Tanning creates interiors that are really terrifying, or terrifying and funny all at once like Family Portrait (1953-4) in which the patriarchal power of the father is literally depicted as larger than the other members of the family, with the maid and the dog roughly equivalent in size and importance.  Hilarious, and deadly. 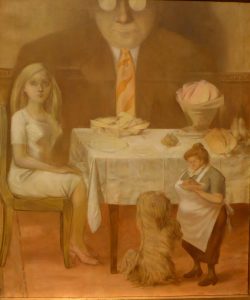 The Tate exhibition managed to show both the progression and the repeated themes of Tanning’s work.  Her pictures in the 1940s and early 1950s are often done in Daliesque “realism”, meaning that she depicts impossible things in a realistic way (as the true surrealist that she was).  For example The Guest Room (1950- 52) which features an adolescent girl standing awkwardly naked in a room which contains hooded figures, broken eggs and another child in bed with a life-sized doll.  The Mirror (1950) depicts a 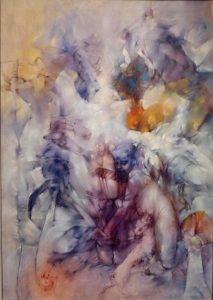 sunflower looking at itself in a mirror, with pin-sharp realism.  But then in the later 1950s she moved into a new style of abstract but recognisable “smoky” pictures in which figures and space merge into each other.  These pictures were not my favourites, but some were just as disturbing and involving as the starker and more figurative works.  For instance Insomnias from 1957 gives a nightmare version of mental unease.

As well as the doors, there were legs!  The out-flung limbs in her later “smudgier” pictures (by the way, to any experts reading: apologies for these amateurish terms!), seemed to me to be connected to her work in soft sculpture, which began in around the mid-1960s.  She uses flesh-pink cotton, carefully tailored to shape, and/or furry brown material to create soft entwined bodies that suggest sex, struggle or maybe just rolling about on the floor playing. 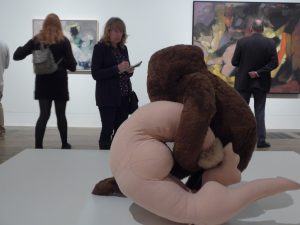 And there is E 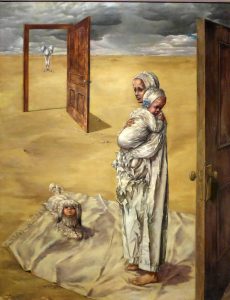 mma, too (1970).  Named after Emma Bovary in Flaubert’s novel the soft sculpture of a belly was placed next to a series of watercolours of mothers and babies from the 1960s along with the well-known picture from 1946-7 called Maternity.  In this painting are doors again, preventing or trapping women or perhaps holding out the possibility of escape.  The simultaneously scary and amusing element in this picture is the dog with a child’s face (there were Tibetan dogs all over the place in the exhibition: she owned them and included them obsessively in her work in different guises, sometimes scaled up to human size).

The door, the soft sculpture of entangled legs and the deadly interior all came together in the most exciting piece: an installation called Poppy Hotel, Room 202 (1970 – 73).  In this real-space room, bodies are bursting through the walls and morphing from the chairs.  Something rather unpleasantly grey and amorphous is emerging from the fireplace.  But the really menacing aspect is that the door is arranged to conceal whatever is beyond (or indeed whatever or whoever may be coming in).  Here you can see me furiously recording my impressions of this most eerie and compelling artwork. 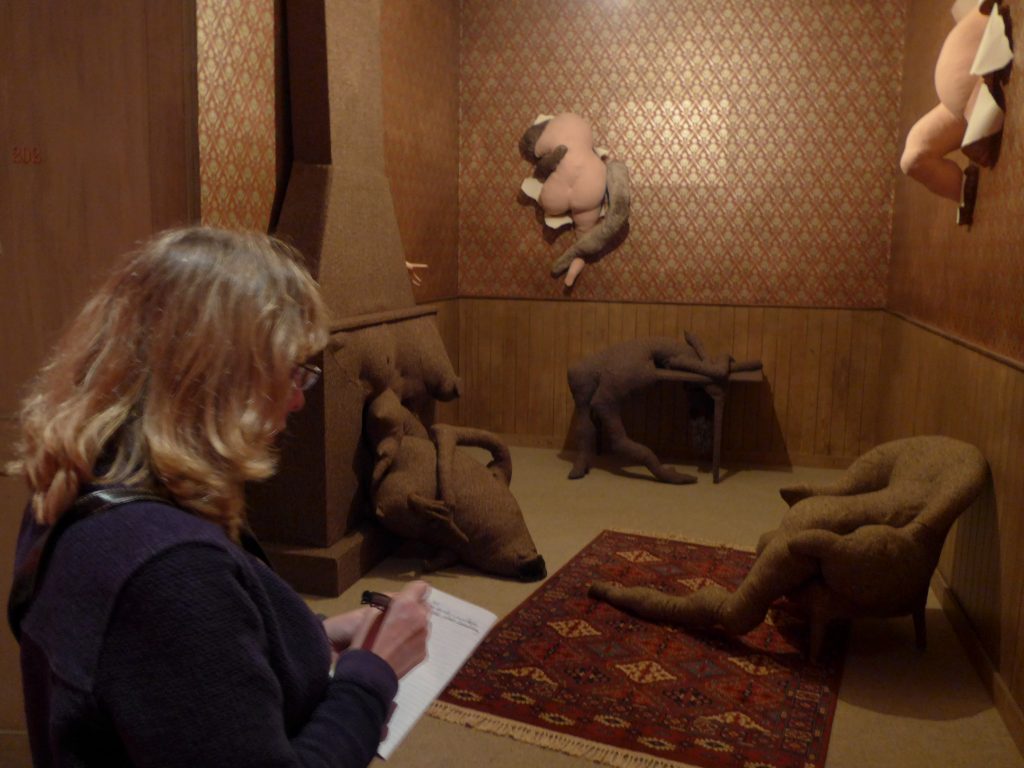 The joy of surrealism is always in the humour.  At the Tate we were treated to Don Juan’s Breakfast: a soft sculpture of a tankard with bursting buttons and overflowing foam reminiscent of both female cleavage and male libertine plumpness.  Even in this joke, the 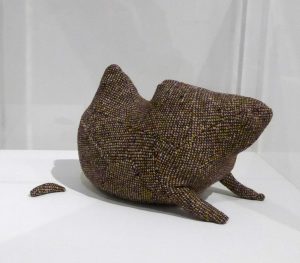 vulnerability of women is somewhere in the background.  In Tweedy, however, we had just the joke: a fantasy tweed-covered animal with a little matching turd.

I came away buzzing with inspiration and my faithful companions were enthusiastic too.  My son Bryn said he had got part-way round the exhibition when he read Tanning’s statement that she hoped each piece would give something different on each successive viewing.  “So I went back to the start,” he told me, “and there was”.  My partner David also picked up on the bold adoption of new styles throughout a long career but echoed my impression in saying that it was “all of a piece”.

Tanning also produced written work: a novel, two memoirs and a volume of poetry.  These are all waiting for me to discover and I really hope that this exhibition (and this blog post too) will send many, many people to seek out and enjoy Tanning’s work for inspiration, provocation and amusement.

All the images included here are from the exhibition, where photography (without flash) was permitted.  They are reproduced for educational purposes only.

To see and search through nearly all of Tanning’s work, see photographs of the artist and read summaries of her life and work, go to the excellent Dorothea Tanning Foundation website here.