The Oxford English Dictionary defines a muse as “a person (often a female lover) or thing regarded as the source of an artist’s inspiration”.

Here is one of the muses of Surrealism: 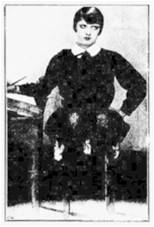 The image appeared on the cover of the group’s journal La Révolution Surréaliste in 1927 and the title is “L’Ecriture Automatique” (automatic writing).

This is the muse as a sexy schoolgirl, dressed in a mix of school uniform and contemporary fashion and, peculiarly, legless (although the white flesh of her knees shows enticingly through her clothing).  She is in a trance, taking dictation from the unconscious, with dark eyes and rosebud mouth.

To say that the Surrealists’ attitude to women was complex is something of an understatement.

On one hand, Surrealism was the first art movement to include women as artists in significant numbers.  For the women artists themselves, on the other hand, the ideal of Woman as childlike, close to nature or in touch with other realms, did not always help them when it came to living and working as active, creative artists.

The male Surrealists were inspired by the ideal Woman’s desirability, irrationality, and mystical rapport with dreams and the unconscious and they admired the bold freedom of the girl child in particular (as shown by the image above).  But the function of the Surrealist feminine was to give access to the surreal (or the “Marvellous”) for the male artists, functioning as a muse is supposed to do.

A photomontage  (see below) from a 1929 edition of La Révolution Surréaliste shows the Surrealists with closed eyes arranged around a painting by Magritte which contains the words “I do not see the …. hidden in the forest”.  The word ‘woman’ is replaced by a conventionalised fine art nude. 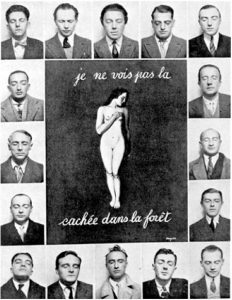 This image neatly illustrates the sexual politics of the 1920s Surrealist group.  The men are recognisable individuals (such as the leader André Breton, poet Paul Eluard, filmmaker Luis Buñuel and artist Salvador Dali); the woman is an archetype.  They are clothed; she is naked.  In fact there were no signed-up women members of the Surrealist group at this time and the position of Woman was as in this picture: a muse, inspirational ideal, and stand-in for male creativity.  She also seems to represent the male unconscious.

Then, in the 1930s, there was an influx of young women into the Surrealist group, such as Meret Oppenheim, Leonora Carrington and Lee Miller.  All three joined the group as friends or lovers of the established male artists and were some ten or fifteen years younger than them.  It was as if the sexy schoolgirl muse of automatic writing had come to life!  There was even a real schoolgirl, fourteen year old Gisèle Prassinos, who wrote poetry which the Surrealists considered with great seriousness.

So the image of the femme-enfant, or child-woman, came more and more to the fore, sometimes connected to Lewis Carroll’s Alice.  The femme-enfant was a sexually attractive young woman with childlike freedom and distain for rules, and indeed for women like Carrington, who had fled from her stifling upper class upbringing, a rebellion against family and propriety was the only possible route to becoming an artist.  But the image of naive, sexy child is a male invention, serving masculine needs (and now, of course, we are more likely to question such images as paedophilia, in particular, Hans Bellmer’s La Poupée series http://www.thesurrealists.org/hans-bellmer.html)

Feminist writers on Surrealism are divided over the femme-enfant.  Whitney Chadwick regards it as an “albatross” around the neck of the actual women artists and says that it worked to “exclude women artists from the possibility of a profound personal identification with the theoretical side of Surrealism”.  Catriona McAra, on the other hand, stresses that curiosity (Alice in Wonderland’s greatest asset) is a wholly positive attribute in Surrealism, and that the femme-enfant seeking knowledge has been an inspiring model for women.  Likewise, Penelope Rosemont says:- “from the surrealist point of view, childhood is not a demeaning category…Far from being infantilized and helpless, the surrealist child-woman is a proud and defiant being who refuses to surrender the child’s boldness, curiosity and spirit of adventure”.

Defined as muses and depicted as children, how did women artists respond?  Whitney Chadwick remarked back in 1985 on the prevalence of self-portraits by women surrealists.  It is as if the women needed to define their own image in place of the male-authored abstractions of them.

Max Ernst and Leonora Carrington’s brief, intense and transformative relationship contains elements of the child-woman pattern.  Aged 20 to his 46, Leonora was the third younger woman in his life.  In his Preface to her collection of stories “The House of Fear” (1938) he writes of her as “the bride of the wind”:

“Who is the bride of the wind?  Can she read?  Can she write French without mistakes?  What wood does she burn to keep herself warm?  She warms herself with her intense life, her mystery, her poetry.  She has read nothing, but drunk everything.  She can’t read.  And yet the nightingale saw her, sitting on the stone of spring, reading.”

Here again is the child-woman of Surrealism.  Carrington, like the schoolgirl writing automatically without will or understanding, is invested with magic and the ability to grant access to the Marvellous.

The uncomfortable truth is that without her association with Ernst, Carrington’s stories and paintings might not have been received, but the price is to be presented as a sort of infantile idiot savant.

Carrington’s self-portrait from around the same time, “The Inn of the Dawn Horse,” contains a child’s toy: a rocking horse. 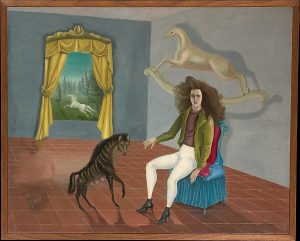 It also features a lactating hyena, which has been conjured up by the Carrington figure out of a puff of smoke (or is it ectoplasm?).  The toy rocking horse is echoed in the wild, free horse that gallops outside of the confines of the room and Carrington, with her wiry mane of hair, is sitting (manspreading?) on a chair with exaggeratedly feminine arms and feet.

She is dressed for riding the horse across open country, and not for remaining in the room of children’s toys.

other images public domain, see https://commons.wikimedia.org/wiki/File:La_R%C3%A9volution_surr%C3%A9aliste,_n09-10,_1927.djvu for the muse of automatic writing as part of the cover of the journal