Major solo exhibitions of women Surrealists are extremely rare so when I first heard that Liverpool Tate were putting on an exhibition of work by the painter and writer Leonora Carrington, I was excited. 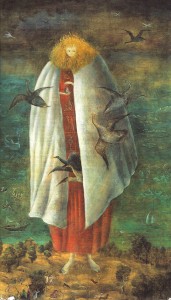 This would be the first British exhibition for 20 years and, after her death in 2011, it felt like a summing up. Before going, I had heard that there was very little information about her in the exhibition, and no catalogue. Well, I thought, this is perhaps a good thing. Every article I have ever read about Leonora begins with a journalistic account of her extraordinary life from Lancashire debutante to muse of Max Ernst in Paris, then mental breakdown in Spain and finally dramatic escape to Mexico where she lived into old age, continuing to paint and write. The story is irresistible and I, too, am guilty of exploiting it by selecting parts to dramatise in my own novel, Swimming with Tigers. But I was hoping that for once a woman artist might be presented as an artist first, and that biography, in the form of the perennial obsession with women’s sex lives over and above their artistic practice and influences, would be of secondary or minimal importance.

So I went to Liverpool full of high hopes and there were indeed very little details. Of any kind. Worse still, apart from perhaps half a dozen paintings, it felt as though her best work was missing and instead there were many of the more pale, fanciful, schematic pictures plus a lot of juvenile work, some interesting but not particularly gripping theatre artefacts and a frankly embarrassing film that she’d designed costumes for in the early 1970s. It was wonderful to see The Giantess (1950) and have the opportunity to study the tiny figures at the base close up, to see the scale of the magnificent Temptation of St Antony (1947) and the compelling Oval Lady (1942) (well annotated, as an exception). Also there was the entrancing And Then We Saw the Daughter of the Minotaur (1953), whose dancing figure on the right is perhaps my favourite piece of Carrington iconography. 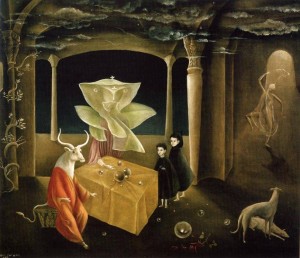 But in the three rooms of the exhibition there was none of that fizz of energy, excitement and transgression that a good Surrealist exhibition has, and that the Manchester Art Gallery’s exhibition of 2009, Angels of Anarchy, had in spades (Carrington’s The Inn of the Dawn Horse, 1937, was a highlight in Manchester and noticeably absent from Liverpool). I blamed myself. Perhaps I was not in the right mood? Then I started to blame Leonora! Could it be that her life’s work didn’t really add up to much after all?

At home I looked again at Susan Aberth’s excellent book Leonora Carrington: Surrealism, Alchemy and Art (2004) and began to suspect that it was the selection, as well as the curation, of the Liverpool exhibition that had let her down. I know next to nothing about putting together an exhibition of this kind but I did notice how the overwhelming majority of the work was described as belonging to private collections. This is not unusual for Surrealist work, I know, but was it part of the problem? The difficulty of gathering Carrington’s strongest work from individuals across the globe must be immense. But the minimal commentary was not excusable. I know from many years of working on women writers and teaching classes about them that readers have to be given the tools to understand and enter into unknown work. It was good to avoid the “superstar” or tabloid gossip approach but information about Carrington’s intellectual and artistic context was sorely needed. Surely it would have been better to fill one wall with ideas and references than with the series of paintings she did at art school, age 16!

The critics have been fairly neutral. Alice Spawls in The London Review of Books remarked on the curious lack of humour in a show about one of the wittiest of the Surrealists, (although I did revel in the delightful bronze Albino Hog (2003), which was black!). The best newspaper review is by Alastair Sooke in the Telegraph and although it is negative overall, he does try to assess Carrington on her own terms, suggesting she was less of a Surrealist than part of a British tradition of fairy painters. I hope there will be a further, better, show of her work before too long and would encourage everyone to go to Liverpool (the exhibition is on til the end of May) and decide for themselves!
I’m extremely glad that Tate Liverpool have put the spotlight on her and I hope it will send interested people (perhaps including Alastair Sooke?) to seek out Abeth’s book which demonstrates what a unique, fascinating and gifted artist she really was. Carrington’s literary work: hilarious, politically subversive and truly surreal, will be the subject of another post.