What is your definition of beauty? Have you got a favourite line of poetry that describes beauty by using an image to suggest it? If you have, it’s probably not this often-quoted Surrealist simile:

“As beautiful as the chance encounter of an umbrella and a sewing machine on a dissecting table.”

The author is Isidore Ducasse (the self-styled Comte de Lautréamont) and it’s from The Songs of Maldoror, a prose poem of 1868. Lautréamont’s work, and this line in particular, was so popular and important to the development of Surrealism that Man Ray created a ready-made inspired by it. 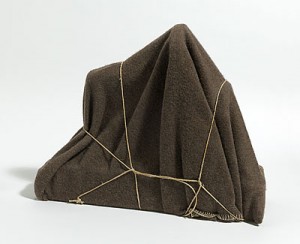 I thought it might be interesting to “unpack” Lautréamont’s simile, and see if it could be used as a model for creating new Surrealist images.

First of all, how does it work? A conventional simile would try to find some commonality or similarity between the thing being described and the thing it’s compared to (such as the moon and a silver coin, which are both round and sort of the same colour) but likeness was not the criteria for Surrealist images, neither was appropriateness (and it was most definitely not good taste!).

The Surrealists (whether visual artists or poets) were not interested in reproducing the world as it is, the idea was to plumb the unconscious and use words to produce “unremembered, previously non-existent realities,” as Anna Balakian helpfully explains in The Road to the Absolute.

So the principle of the Surrealist simile or metaphor is the dramatic clash of unlikeness; an impossible meshing of opposites. In fact, writes Robert Short, “the power of an image was in direct proportion to the incongruity of the entities which it brought together”.

So this is all fine and dandy, but Robert Belton, in an essay from 1990, has a very specific reading of Lautréamont’s simile and large claims for its influence on later Surrealist poetry:

“The coincidence of a man’s phallic accessory and an unthinking domestic instrument on a ‘bed’ designed for bloodletting was simply too potently, aggressively, and violently sexual to be avoided…Ducasse’s simile, as the archetypal act of collage, virtually ensured that other juxtapositions would connote sexual violence for the male surrealist.”

Now I was rather taken aback by this reading of the sewing machine and umbrella as a sort of rape scene because it had never occurred to me, but the image does have a lasting power which means it is very likely to have a sexual subtext (why else do we remember that Cadbury’s Flake ad of the woman lying in the boat going through a waterfall rather than countless other television images involving chocolate bars?). But is Lautréamont’s simile really an encoded image of a pierced woman on a bloody bed?

It’s often been remarked that a lot of Surrealist visual iconography is of women in pieces: women beheaded, dismembered, partitioned, bound, gagged or blinded. Whitney Chadwick ponders this phenomenon in Surrealist art by men at the end of her book Women Artists and the Surrealist Movement:

I’ve often wondered if the ruined umbrella and draped material in Leonor Fini’s painting of 1940 called L’Ombrelle, (The Parasol) is a reference to Lautréamont’s simile. There is a woman’s eye peering out from behind one of the slashes in the umbrella which, now I have it in my mind, rather supports Belton’s interpretation and Chadwick’s point too. 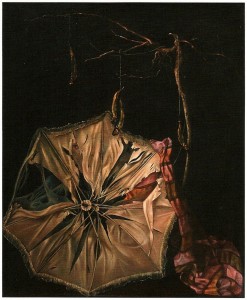 Surely it’s possible to draw on the power (which Balakian describes as a sort of electricity) of Surrealist opposition without promoting sexual violence or even being restricted to the predictable territory of male heterosexuality.

Of course not all Surrealist poetic images draw on the abuse of women’s bodies. For instance, Robert Desnos’ “I have so often dreamed of you that you become unreal” must be one of the tenderest love poems written (and it’s almost unbearable to know that Desnos died in Terezina concentration camp at the age of 45).

Perhaps my favourite image in Surrealist poetry is the final line of André Breton’s 1948 poem “They tell me that over there”, which describes a mythical paradise and ends with a line describing the absence of evil:

“All the flowering appletree of the sea”.

This metaphor splices two things together so perfectly that you can’t see the join. I’ve spent hours enjoying this image and repeating it to myself: it never loses its magic and suggestibility! Is the sea flowering with surf the colour of apple blossom? Is the tree like a sea of flowers? Is the apple tree from the Garden of Eden or is the sea suggesting the origin of life? It’s all of these, and all at the same time!

Joyce Mansour is a poet I’ve recently discovered. She was an athlete with Egyptian parents and joined the Surrealist group in Paris in 1954. In her poem “Remember” written the following year, she is addressing a lover and conjuring memories of their time spent together:

“Remember…
When we heard the rats jingling around
Eating poppies
You and me.”

As Mary Ann Caws (the translator) says, we do not know who is eating the poppies, the rats or the lovers, because the poem is “constructed for both possibilities”.

So why not try this yourself? Make up a simile beginning “As beautiful as…” and make sure the elements are as unlike as possible but somehow joined at a deeper level. Or create an image that has a “double” movement like Breton’s or Mansour’s, vibrating between meanings.

And watch out for that subtext!