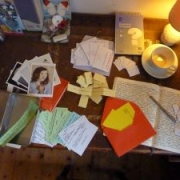 Every Friday morning since the beginning of January I have been sending ten-minute freewriting exercises to my subscribers completely free of charge.

Each one contains a new freewriting prompt plus some advice about how to go about using it (see some examples here).

The prompts are specifically designed to work with the basic unit of freewriting: an unplanned, spontaneous burst of continuous writing that lasts no longer than ten minutes.  (If you have never come across the technique of freewriting, have a look at my guide How to Freewrite.)

Some exercises flex important writing muscles by asking you to look, listen or remember, and describe fully.  Some give the imagination a workout: in one prompt I asked my subscribers to choose a fictitious character or an author and to meet them for a drink.

Other exercises throw a curve ball.  For instance, the prompt “What is my pen doing?” was designed to make the actual act of writing strange and, in the dissociation between writer and what is written I hoped that a creative space would be opened up.  One of my subscriber’s pens did some very strange things and here is what came out: 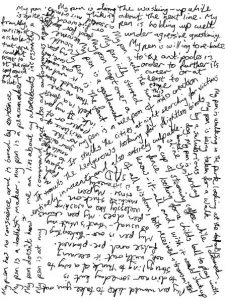 Only one prompt so far has been at all solemn, namely the one in which I asked people to describe a loved one.  It was tinged with sadness because I suggested they would be glad to have these recollections in the future if the loved one was no longer around.  (This was my experience and you can read about it here.)

I do think there is benefit to be gained from going psychologically deep in a freewrite.  For me, the prompt “What do you want?” provided strength and clarification recently, as I am preparing to leave an employer after 30 years.  But overall, these prompts are designed to be playful, liberating and fun.

It’s my experience that going straight after good writing or writing ideas with a serious attitude and the heavy weaponry of plans and outlines, or techniques and rules, is pretty much bound to result in dead writing (the weaponry kills it!).  These exercises are more like jolly excursions with no particular destination.  But, as you trundle along enjoying the trip, there will be bright butterflies of inspiration to be caught from out of the corner of the eye.  Then, afterwards, when you read back your freewriting you can see if any of those butterflies were rare and potentially worth further study.

The pressure is off!  You are writing for yourself and no one needs to read what you’ve written, or certainly not until it has been edited (sharing your raw freewriting is not usually a good idea, unless it’s as seredipitous as the example above).  Freewriting’s standards are by definition low, and I supply the instructions so you don’t have to think up something to write about (obedience is very relaxing sometimes!).  Also, it’s just ten minutes out of your week.

Thinking about how best to use the time we have can be such a heavy prospect: what if we make the wrong choice and end up wasting all those hours on a project that will fail?  But with freewriting the investment is so low that it’s a risk that’s easy to live with.

We have (according to my calculations) 6,720 waking minutes in a week (if we sleep for 8 hours a night).  Just 10 of these minutes out of every 6,720 could give you the skills, habit and material to start writing.  In fact, if you write for just ten minutes regularly, you ARE a writer (because , as Peter Elbow says in Everyone Can Write, a writer is a person who writes). 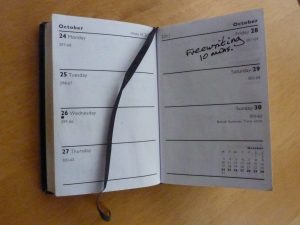 Even if you can’t immediately see the benefit of freewriting, I think it helps to learn to waste time, and I don’t mean the sort of time-wasting that involves TV and junk food!  The creative process is all about not knowing what, if anything, you will end up with.  In this profit-obsessed and product-driven world, creative time-wasting is a radical act (and surprisingly hard to justify).  All writers, including professionals, would be well-advised to revert sometimes to the child-like activity of making things up just to see what happens.

Learning to let go of things you have written is another benefit of the ten-minute freewriting sessions.  The instruction to keep writing no matter what, teaches your hand and heart to write fearlessly, and it is only by actually writing that writing gets done.  Unfortunately, many people freeze up when they try to write.  But if you are used to writing for a short length of time and, more often than not, throwing the whole lot away afterwards, then you won’t scare yourself into stopping.  Instead you can keep going, knowing that it’s OK to produce rubbish.  Getting though that barrier of having to be “good” frequently means you can find the inspiration on the other side of fear.

My Friday freewriting exercises are not just for writers, although I occasionally note how writers could take them forward in a specific way.  Freewriting is a powerful tool for self-development too, and I believe that the actual act of writing is, in itself, self-creating and self-medicating.  It will tell you who you are and what really matters to you.  Equally, for society as a whole, creative writing is a way to increase human dignity and to assert the worth of the individual.  And it’s fun!

Please sign up (by putting your e-mail address in the box at the top, on the right) and give it a go.  The freewriting prompts will arrive at 9 a.m. every Friday morning.

The e-mails go directly from me to your inbox and I have nothing to sell, so you can rest assured that I won’t annoy you with marketing (neither will I share your e-mail with anyone else).  The Friday e-mails will continue right through this year (barring disasters) and will remain free for now.  In the future I might think about a small fee, so grab them for nothing while you can and see if you can turn yourself into a writer in just ten minutes a week.

To get you going, here is the prompt from yesterday.  Why not try it right now?