I’m guessing it’s happened to you: you are re-reading a book and a crucial scene, the one you remembered most clearly of all, doesn’t actually occur in the story at all. 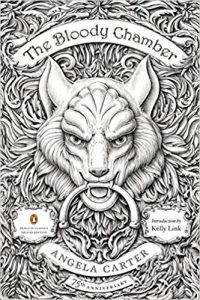 For me, this happened with Angela Carter’s short story “The Company of Wolves” (in her collection The Bloody Chamber), and it set off a chain of connections and mysterious, fragmentary memories.  For quite a while now, I’ve been struggling to make a poem out of it all, and failing!  So I’m going to hand it over to you, my talented readers, to see if you can figure it out.  This puts you in the position of my psychoanalyst, which is not at all comfortable from where I’m sitting (or lying, on the couch!) but it should make for an interesting read.

After some thinking and searching, I eventually realised that the scenario of the wolves sitting in a tree is actually from a famous case study by Sigmund Freud instead.  Its title is “From a History of Infantile Neurosis” but it’s generally known by the name Freud gave to the patient in question: the Wolfman.  Published just before World War One, it was an important milestone in the development of Freudian psychoanalysis.  The Wolfman was an aristocratic Russian called Sergei Pankejeff, and during the analysis he drew a picture of a dream he had had at age four of white wolves sitting in a walnut tree outside the window where he slept.

I had somehow grafted the Wolfman’s picture

(which Freud included when he published the case study) onto Carter’s story!  In fact it is entirely possible that Carter had the Wolfman in mind as she wrote the story.  She was alive to all sorts of myths and traditions when constructing her tales and she almost certainly invokes (and challenges) Freud in her creation of the desirable, dangerous wolf-man of “The Company of Wolves”.  Equally, the way that the wolves on the ground in the story echo the wolves in a tree in Freud’s case study might have been pointed out to me by a literary critic when I was researching her work to teach at my classes at university.

“From a History of Infantile Neurosis” is a tough read at 113 pages in the Penguin Freud Reader, but Freud argues in essence that Panejeff’s dream of the wolves is a symbolically reversed, retrospective memory-with-new-understanding.  He theorises, drawing on other remembered stories and events related during the analysis, that Panejeff observed his parents’ lovemaking when he was 18 months old and that the dream of the wolves resurrected this memory in a coded form (the picture of a wolf in a book Panejeff read as a child provides the link).  There’s a summary of the case here (it would take a lot more time and space than I have here to outline the fascinating, and contentious, connections that take Freud to his conclusion). 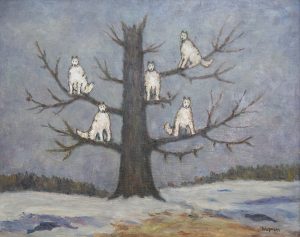 The significance for me, however, in tracking down the image of wolves in a tree that I had substituted for Carter’s wolves in the cabbage patch, was the comparable resurrection of a very old, lost memory of my own.  The wolves in the Wolfman’s dream brought back a long-repressed memory of a poem I read as a young girl.  I remember it as my first deep understanding of a poetic image but I can only recall a fragment of the poem itself.  It was a translation from the French, but I can’t remember the poet’s name, or the book it was in.  All I have are these two lines:

One part of me would love to find the poem again but on the other hand it might break the spell.  The two lines are perfect: a distilled narrative in two moments (the birds settle, then fly away) and to me it contains the very essence of poetic symbolism, with a visual, sensory impact as well as poignant sense of melancholy mixed with hope.  If you know the poem, which I suspect is by Mallarme, or Verlaine, or even Baudelaire, you had better not tell me in case it betrays some Freudian secret like the primal scene hidden in the Wolfman’s dream!  After all, for these two lines to have persisted in my memory for so many years indicates that there must be some greater significance hidden in the complete poem.

I’ve been trying to weave these loaded symbols of wolves, birds and trees into a poem of my own for many months and even tried, at one point, to cast it as a story.  As I was struggling to shape these unruly elements into some form, I saw a programme on TV about neuroscience.  Apparently the brain itself, in computer-generated imaging, looks something like a tree and I couldn’t help thinking about the thoughts in my lost poem landing like birds and then leaving the branches, unseen.  To interpret the tree of the poem-fragment as the brain gives a much darker reading because when all thoughts are gone, life and consciousness is at an end.  Did I retain this image so sharply and for so long because it was an early intimation of mortality?  Freud might have had other ideas!

The poem isn’t finished and I have a feeling the content will recur in another guise, possibly more than once, in future writing by me.  Sometimes it’s better to leave mysteries intact or only partially explained so that they have the force of ambiguity preserved within them.  Perhaps, like me, the writer of my lost bird poem was trying to recreate something he only partially remembered but felt the power of, nonetheless.

The image of the brain is from this website

The Wolfman’s painting is reproduced all over the internet, so if you own the  copyright, please contact me and I will remove.  I never knowingly reproduce copyrighted material on my blog.