Right now, like my own students, I’m revising my work.

On April 8th, a year after starting, I completed the first draft of my new novel The Dead Have Time to Listen.  It was an intense last few weeks in which the writing took over my waking and sleeping life and I wrote more and more words every day.  The feeling at the end of writing a novel is like nothing else: a state of possession in which the people and events of the story seem as real, if not more so, than the events of real life.  Now I am the 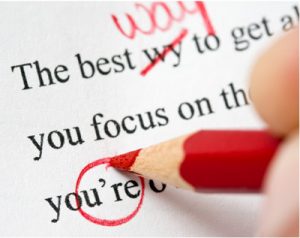 editor of my own work: niggling away at every clunky word, misplaced comma and dodgy reference, and trying to root out every glitch and continuity error.  As a teacher I am used to marking (I like it!) but you can probably tell which part of the writing process I prefer!

Revision is a particularly extreme example of un-free writing and it’s led me to reflect by contrast on the qualities of that total immersion in character at the conclusion of writing a novel.  This spontaneous outpouring (sometimes I couldn’t even stop when I tried!) is surely an example of very free writing and I would also liken it to a sort of trance, or possession by spirits, in which the writer is taken over by another identity.  (This is why I can’t answer the phone when I’m working: I’m really not at home!)

Not co-incidentally, my novel is narrated by a dead spirit and also contains scenes of possession in which the narrator provides the highly unusual perspective of being the spirit doing the possessing. 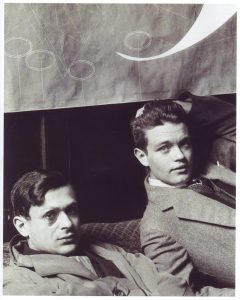 This also reminds me that the Surrealists were really spiritualists at the very beginning (they called it “the period of sleeping fits”).  In the early 1920s, when Breton was formulating the tenets of the movement, it was the fashion for members of the group to fall into trances and speak or write messages from occult sources. Breton never believed these were communications from the dead but he did accept that they were from the unconscious. Unfortunately, the rivalry that Breton inspired in his followers led to more and more extreme performances of trance and hypnotism.  Robert Desnos and René Crevel competed to fall into ever-deeper states of alienation until Crevel (on the right in the picture) led a mass suicide attempt and Breton called a halt to the whole thing.

Keith Johnstone’s book Impro (on techniques of improvisation for drama students) has been a really important source for my novel and in it he describes the trances of voodoo ceremonies and the equivalent effects of actors being possessed by masks.  He talks about the masks as being inhabited by actual beings who take over their wearer and how the actors have no recollection of the things they have done or the time they have spent under the influence of the mask. 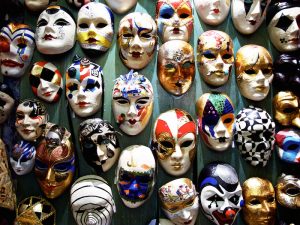 Spooky stuff, but actually sort of familiar to me from that last push on the novel when I would emerge, thousands of words and hours later, with the sensation of not having lived as myself at all.  If I can create the same suspension of self in my readers, then the novel will really have succeeded!

Overall, it seems to be the week for all things dead.  My partner and I perform as Hopewell Ink (see the About page for a recording) and we have been developing a new piece called Electronic Voice Phenomenon.  If you don’t know about EVP it’s, again, linked to the spiritualist tradition and the theory is that the voices of the dead can sometimes be heard in electronic white noise.  The practice of listening for spirit voices in electronic technology goes right back to the earliest gramophone records. 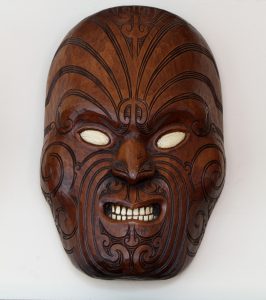 For Hopewell Ink’s attempt to hear the dead speak, I’ve cheated a bit and written some scripts of what they might be saying if we could hear them.  If by chance you can come to our performance at 6.30 on May 22nd in the Crosville Club in Bangor (North Wales), you’ll be able to catch snatches of their reminiscences.  During the performance I’ll do my best to allow these spirits to take over so that, just like the characters in my novel, they can push aside my ordinary, “real” self for a short time at least.