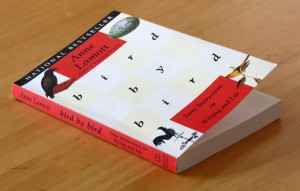 One of my favourite books about writing is Bird by Bird by Anne Lamott.

It’s full of cheering jokes and really useful advice from a startlingly honest writer. One of the best chapters is about how an editor’s rejection of a re-written manuscript sent her into complete mental meltdown. “Luckily, I was still drinking then,” she writes and I hoot at that line every time (no, I know alcoholism isn’t funny, but even so).

Anyway, although Lamott doesn’t mention freewriting as such, her recommendation of starting out with “shitty first drafts” is in very similar territory, because Anne Lamott knows all about the terrors of the blank page. Here’s her description of the writer sitting down to write:

“You turn on the computer and bring up the right file, and then you stare at it for an hour or so. You begin rocking, just a little at first, and then like a huge autistic child. You look at the clock, yawn, and stare at the paper again…and you try to quiet your mind so that you can hear what that landscape or character has to say above the other voices in your mind… They are the voices of anxiety, judgement, doom, guilt.”

This is where freewriting can really come into its own. By enforcing just one requirement, namely writing continuously for an agreed length of time, freewriting makes it possible to bypass these voices. What you write probably won’t be usable as it stands and it certainly won’t be perfect but it will be a start (a “shitty first draft”). It’s a triumph of creativity over negativity.

Anne Lamott passes on another suggestion for dealing with negative, inhibiting, critical inner voices. A hypnotist recommended to her that she imagined each of her inner voices as a speaking mouse. Then she was to imagine picking up each mouse by the tail and dropping it in a jar. Next, the lid goes on and the voices get turned right down to nothing by a volume control button. “Watch the frantic mice lunge at the glass,” says Lamott, “and get back to your shitty first draft”.

I recently had one of the most immovable writer’s blocks of my nearly eight years of fiction-writing. The cause? I taught creative writing at a university. All of a sudden I was an authority on writing! It froze me stiff, and every approach to the blank page was drowned out by voices telling me that unless I was a naturally and genuinely gifted writer I had no business claiming to be able to teach others. Without freewriting I’d have made no progress at all on my new novel that was straining to get into the light but punched back every time by the voices of perfectionism.

So it makes sense to separate writing into two processes. First there are the early, freewritten, drafts. This is where you do whatever it takes to create a permissive zone into which no judgement, no assessment, and no authority figures can gain access: it’s the playground, the sandpit, the colouring book. Then, with plenty of messy, generous, rubbishy writing you can invite back the critic, the editor, the one who knows about genre and structure and dialogue and plot and find the beginnings of a viable piece of writing. Then you edit. And you rewrite (and maybe you freewrite some more). Then edit again and eventually, after the third, tenth or hundredth draft, you’ll have something that retains the wildness and the “you-ness” of the first, free, “shitty” draft and it will be worth reading. It might even be publishable. But that’s another story.