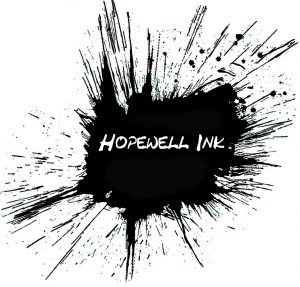 Since 2013 I’ve been part of a band called Hopewell Ink and we’ve performed in local venues around North Wales.  Hopewell Ink consists of spoken word, and various instruments including drums, harmonium, and slide guitar.  The words are written and performed by me, and the electronic or acoustic music and sounds are created and performed by my partner, David Hopewell.

On Wednesday March 14th BBC Radio 3 are hosting a gig at Neuadd Ogwen in Bethesda and Hopewell Ink will be performing at 8 p.m., followed by two other bands. Link to Neuadd Ogwen The gig will be broadcast on Radio 3 on Thursday March 29th at 11 p.m. on “Exposure” which is a monthly programme that showcases music from different parts of the country.

We perform pieces that range from descriptive landscape poems (such as “Curled Slug and Scaffolding”) to cheerful, almost danceable numbers (like “Hard Heart”).  Some tackle big topics such as what heaven might be like (if it existed), while others are less grand: one is about an annoying, unidentifiable noise.  There are soundscapes of the natural environment and word-portraits of cities, people and daydreams.  We even try to tune in to the whispered words of dead spirits.

There’s a CD in production called “The Cure for Silence” (named after the title track) and we’re hoping that copies will be available on the night, and as downloads at  https://hopewellink.bandcamp.com/album/the-cure-for-silence.

I compose all the words for Hopewell Ink and every piece I’ve worked on has started out as freewriting.  It will have been a ten-minute freewrite on a random topic, perhaps, or something I’ve written when away from home in response to a new place.  I then take the kernel or even a whole passage of freewritten material and develop it, by addition or subtraction, into a finished shape.  Usually what I produce has a beginning, middle and end, but sometimes it will bear the trace of the associational nature of freewriting and work more like a series of loosely-connected images, which is how Still Life with Old Shoe ended up.  You can listen to that track here 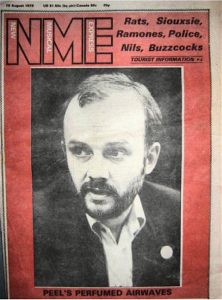 er view on Hopewell Ink, I thought I’d interview my band member David, NME-style.  Below are my questions (“me”) and his responses (“him”):

It’s Sunday lunchtime and we’re sitting in the kitchen.  David’s just made some soup.  He’s wearing a Captain Beefheart T-shirt and is finishing off the dregs of a bottle of brandy.  He seems somewhat reluctant at first to answer my questions, so I start with the easy ones:

Me: How would you describe Hopewell Ink?

Me: Would you say it was experimental?

Him: Not exactly experimental.  Unusual.  It’s unusual because it has spoken word with specifically composed musical backing.  Not many people do this.  The late Jayne Cortez, who performed with Ornette Coleman was one. [here’s a link to Cortez performing with her son]

Me: What would you say is the usual format, then, for spoken-word and music performance?

Him: Rap.  But rap is street music and we’re coming from a different context, which I suppose is poetry on the page.  Rap is the route most people go down, like Kate Tempest.  It’s aggressive, in-your-face, and we’re more contemplative.

Me: You come from an environmental sound recording background.  How does that connect to what you do with Hopewell Ink?

Him: Well, if you remember [I didn’t!] the first incarnation of Hopewell Ink was in one of my long pieces of environmental recordings called Surfaces [here’s the  link ]

In Surfaces I used hydrophones, contact mics on fences and Aeolian instruments [instruments played by the wind].  You added some spoken words but they were just one element and added after the other parts were put together, whereas now the words are the focus.  Back then, when I was doing the original recordings at The Spinneys [a bird reserve near Bangor] or by the river [in the Ogwen valley], you were freewriting at the same time, in the same place.

Me: How important is the environmental sound aspect in Hopewell Ink?

Him: Not very.  But we do have it on one track: Newborough.  We might use it again in the future but it would be a different balance between the spoken and field recordings because the focus is on the words now.  And we have shorter pieces.

Me: Would you say what Hopewell Ink does is “difficult” or “inaccessible”?

Him: No.  Generally people like listening to it and find it interesting, and moving.  It’s very accessible.  Some spoken word is very formulaic and stylised but I think Hopewell Ink is more accessible because there’s more going on.  The aim is to add additional elements to the spoken word format and give it more depth.

Me: Can you sing along/dance/take drugs/have sex to Hopewell Ink?

Him: Sing? No.  Dance? Occasionally.  Take drugs?  I’ve heard it’s happened.  Have sex?  Well, the one about the dead people might put you off.

Me: Is it any good to put on in the background, at a party, maybe, or while working?

Him: Terrible idea.  You wouldn’t want it on at a party, unless you want it to sound like there’s more people there.  And it’s definitely not background music.  It invites active listening.

Him: Active, or deep listening as Pauline Oliveros calls it, is where you consciously bring attention to something rather than a more passive approach where you already know what you are going to hear (like Abba’s Greatest Hits).

Me: Improvisation is one of your other musical interests.  Do you improvise as part of the process for Hopewell Ink?

Him: All the music and sounds for Hopewell Ink are improvised at the composition stage and some elements are improvised on stage.  I have a basic structure but I never play exactly the same thing twice.  I do use some loops, though.  They are either recorded in advance or during the performance, then I set them to run as a backing.

Him: Words more often come first but not always.  I had the concept for Electronic Voice Phenomenon [a piece about the spiritualist idea of being able to hear the voices of dead people in electronic white noise] and you produced the words.  Most often I’ve had a musical idea and you’ve offered a piece of freewriting to fit it, then we’ve worked on it together.

Me: What’s the best and worst thing that’s happened during a Hopewell Ink gig?

Me: Like the time the echo wouldn’t work and the loop had a recording of us arguing on it that we couldn’t switch off?

Me: Where do you see Hopewell Ink going next?

Him: I’m guessing you mean artistically.  We seem to be producing simpler things.  Shorter, and snappier, like “Ticking” rather than the older stuff like “Still Life with Old Shoe” that’s longer and more complicated.  But it all depends what inspiration strikes next.  It might be a concept album!  One of my favourite pieces of music recently was “Sleep” by Max Richter and that lasts eight hours.

Him: It’d better be another bottle of brandy,  I’ve finished this one! 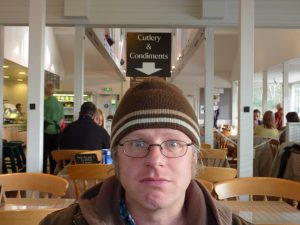