I am a huge fan of Austin Kleon. His advice to artists is to “show your work” or, in other words, to share the creative process in order to invite input, garner interest and de-mystify the labour involved.

In this spirit I thought I would share some writing with you which is still in development.  It’s destined as a new piece for my spoken word band Hopewell Ink and although I’m fairly happy with the words as I’ve written them, collaboration with my musical partner could lead to changes.  For instance, it’s not unknown for me to redraft after, or even during, the sessions in which he devises the sounds or music to go with the words: it’s a two-way street where his sounds make me re-think my words at the same time as my words are suggesting sounds to him.  We rarely disagree…

The new piece is called “Gentle Men”.  Rather amazingly, it originated in an idea I had over 13 years ago and is listed in a notebook as a “genre-indeterminate idea” meaning I didn’t know if it might turn into a poem, story or even, I suppose, a novel.  Hopewell Ink was a long way in the future then.

The direct source was a song by John Martyn called “Don’t You Go”  a hauntingly beautiful lament about the perennial sacrifice of young men by warmongers, and the words are an appeal to resist the call to arms.  (You can read the lyrics here.)  Loving John Martyn’s music as I did (and do), I was moved by the song and made these (freeewritten) notes: 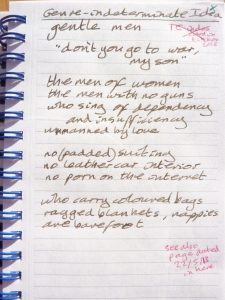 This languished in my notebook until 2013 when I exhorted myself to have “another go”: 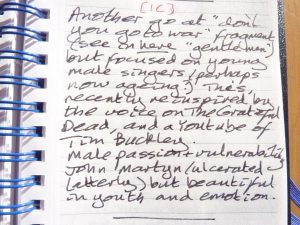 In the second note, I’m focusing on the young male singers themselves, after seeing this video on Youtube of Tim Buckely singing “Song to the Siren”.  Again, however, the “germ” didn’t grow into anything.

But the last few years of the #MeToo movement have put ideas about masculinity into new contexts.

Feminists such as myself have spent years analysing and protesting against the ways that society sets out what should be rewarded in women (e.g. attractiveness, docility, selflessness).  There has never been a shortage of descriptions of the ideal woman by men (in art, advertising, or government policy, for instance), but women rarely spell out what they want men to be like.  Culturally, the image of the superhero is maybe the closest to a shared male ideal, but that isn’t much practical help to anyone.

Some men, such as Robert Webb (see a clip from an interview here), have been trying to de- and re-construct the idea of masculinity and I think women should join in the debate.   Female views should in theory be welcomed because some men nowadays seem to be genuinely confused over issues of consent, and basic good manners.

It’s all made me want to identify and explain clearly what I think is admirable in men, so I went back to my notebook entries and finally wrote something based on those old fragments.  Nervous about sharing my views on masculinity in public, I tried it out first on the men in my life…and they liked it!

Here it is, then:  “Gentle Men” which will be coming to a Hopewell Ink gig or CD soon, in some form or other!  Let me know if you like it, or have some suggestions for improvement.

I’d also be interested to hear your views on masculinity today, whatever your gender: what, for you, is a gentle man? Or do you have a different ideal of masculinity altogether?  Do you agree with Robert Webb that masculinity has no meaning or relevance in modern society?

Finally, why not make these questions the basis of a freewrite using the prompt “what is a gentle man?” or “which men have I admired and why?” Choose one and write without stopping for 10 minutes, putting down exactly what you find in your head without editing or censorship.  Alternatively you could try freewriting on the more direct question “what is a good man?” in order to blast through your defences and give you a truthful result.  Who knows, it might even lead on to a story or a poem.  Good luck!

UPDATE: we released the album LURID on January 13th 2019 and “Gentle Men” is the last track.

You can listen for free, or pay to download it, here.