Some artists have an utterly distinctive voice.  Within a second of hearing one twisted, mournful note, I can recognise the great Johnny Marr of The Smiths.  In the same way, the weirdly uncomfortable but perfect half-beat-off of Emily Dickinson’s poetry springs out at 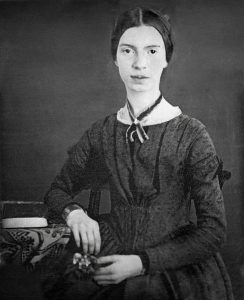 me before I have had time to check the quotation is hers.  Like Marr’s whining, piercing sound, Dickinson’s skewed verbal rhythm is as recognisable as her photograph.

How do you “find your voice”?  It stands to reason that each one of us is a unique physical incarnation of humanity with an unrepeatable set of experiences and reactions leading to a collection of beliefs, knowledge and memories which, taken together, are unlike anyone else’s. To find an individual style (in words, music, visual art and so on) is surely a case of using that medium to externalise or embody our uniqueness.  Sounds easy?  I’d say it’s the hardest thing a creative person has to do.

My championing of freewriting is bound up with my own attempt to do this: I believe that if I think about how to be uniquely myself while writing then it’s likely to be strained, self-conscious and, paradoxically, imitative.  But if I can forget myself (and the speed of freewriting is what helps here) the “real” me can come out, a bit like when I’m with people I know and love versus in a formal, highly judgemental situation: the chances of saying something original and genuine are much greater on a walk with my son than at a job interview where I’m trying to make a good impression.

Natalie Goldberg  has a great story about voice in her book Thunder and Lightning: Cracking Open the Writer’s Craft (p.137-40).  It’s about a friend and student of hers called Barbara Schmitz who began by writing obscure, avant-garde, oblique poems which were seemingly at odds with her character and background.  Natalie was less than impressed with the work and advised her instead to “write what you know” but Barbara, to her credit, 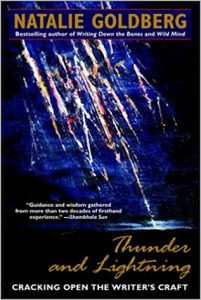 kept ploughing her own, odd, furrow.  Some years later, Natalie received a poem from her and was astounded at its brilliance.  It was off-centre, original but also unmistakably rooted in her friend’s life and personality.  “You finally matched yourself on paper,” Natalie told her friend on the phone (I love that part!).

It seems that the student had to inhabit a very alien style and register in order to finally ‘express’ herself.  But these terms I’m using are beginning to make me feel uncomfortable.  I have taught and studied in university literature departments for over thirty years now and even when I started out as a wide-eyed idealist, the tide of ‘theory’ was creeping up to drown such naive ideas as an essential self which pre-exists language and waits to be expressed in art.  Poststructuralist theories (thrillingly French, wreathed in cigarette smoke) made us question what creative writing teachers, then and now, impress on their apprentice writers: find your voice, express your authentic self.

For instance, when it was explained to me that it was impossible to write a novel or a sonnet, or anything else that counts as literature, without having first read one (not just unwise; actually impossible) I accepted that language did indeed “speak me” and not the other way around.  And yet.  And yet.  Still I yearn for it to be true that something written by me could be evidence of my complete originality; as seemingly expressive of a unique self as the nudes of Pablo Picasso or the novels of Virginia Woolf.

It might be best to concede the poststructuralists their victory and admit that what we create will be a version of what we have seen other artists produce and that in the end we all have the same palette of colours, scales and meanings.  But the combination: yes! and the skill in mixing and selecting and searching out the right fit, all of that can be done by will and determination.  In the end, maybe a unique voice can be constructed rather than found, pre-existing within, by sheer hard work.