I’ve been trying to work out if what I know about yoga, which I’ve practiced on and off since childhood, can help me with freewriting because these two activities seem to be very similar in their aims.

The aim of yoga postures, as I understand it, is to alter the way the mind works. Whilst breathing deeply is very beneficial, and having a slimmer, more flexible body and stronger, leaner muscles is good too, the point of yoga is to learn to step back from habitual thought patterns. The aim is to unite mind and body into one. Then, instead of spinning back over the past, or endlessly speculating about the future, or becoming obsessed with judgement, comparison and self-recrimination (or indeed self congratulation) there is total awareness without ego.

Well, I’ve never even got close to that enlightened state, but I think I might have glimpsed what it might be like once or twice for a few seconds in a yoga class. Then, each time, inevitably, I look around and start wondering what’s for tea or how good I am compared to the others in the room at a particular posture or am I wearing a T shirt as flattering as the one the woman in front is wearing and on it goes. The trick you are meant to use in yoga relaxation for this chatter in the mind (“monkey mind” as it’s sometimes called) is to observe it with detachment and let it go. 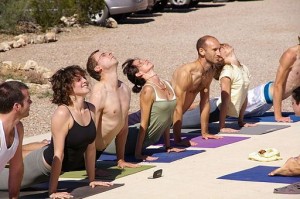 In freewriting the idea is to write down anything and everything that is running through the mind without any value judgements and without stopping. It’s observing the mind in another way. But as soon as you allow those same sorts of thoughts that bedevil yoga practice to take over (is this a waste of time? am I writing as much or as fast as everybody else? will it be any good? why should I do this when Virginia Woolf, or whoever happens to be your role model, didn’t need to bother [actually, she did, but that’s a subject for another day!]), the flow is lost. The same monkey-mind thoughts of past, future, comparison and self-worth, reassert themselves and the writing falters and/or becomes stilted, clichéd, self-conscious and boring.

Because I’ve been to a lot of yoga classes I know now to leave my competitiveness and vanity (mostly) behind. In a yoga class, the value of my forward bend is its value to me, not in its relative merit to the person’s next to me (who is inevitably reaching further and looking more svelte while doing it). So if I bring this same attitude to freewriting I might be able to go beyond myself into some bigger realm where the writing and me are at one and not pulling in different directions. For instance, in yoga I accept that I need to practice the same posture again and again and will never reach perfection because the practice is whole point of it: it’s the process, not the result. To accept the same thing about writing would be to release all the energy and possibility of my life’s experiences and knowledge into potential material (once edited) and circumvent that monkey the ego who jumps up at every opportunity to undermine me with notions of good and bad.

So I think it is true: both yoga and freewriting require relaxation, a lack of competitiveness and a focus on the process not the result. And the aim of both is a dissolving of the self into the practice, whether that is the body stretching or the hand writing so that the ego finally gets out of the way.

Well, we all need something to aim at!